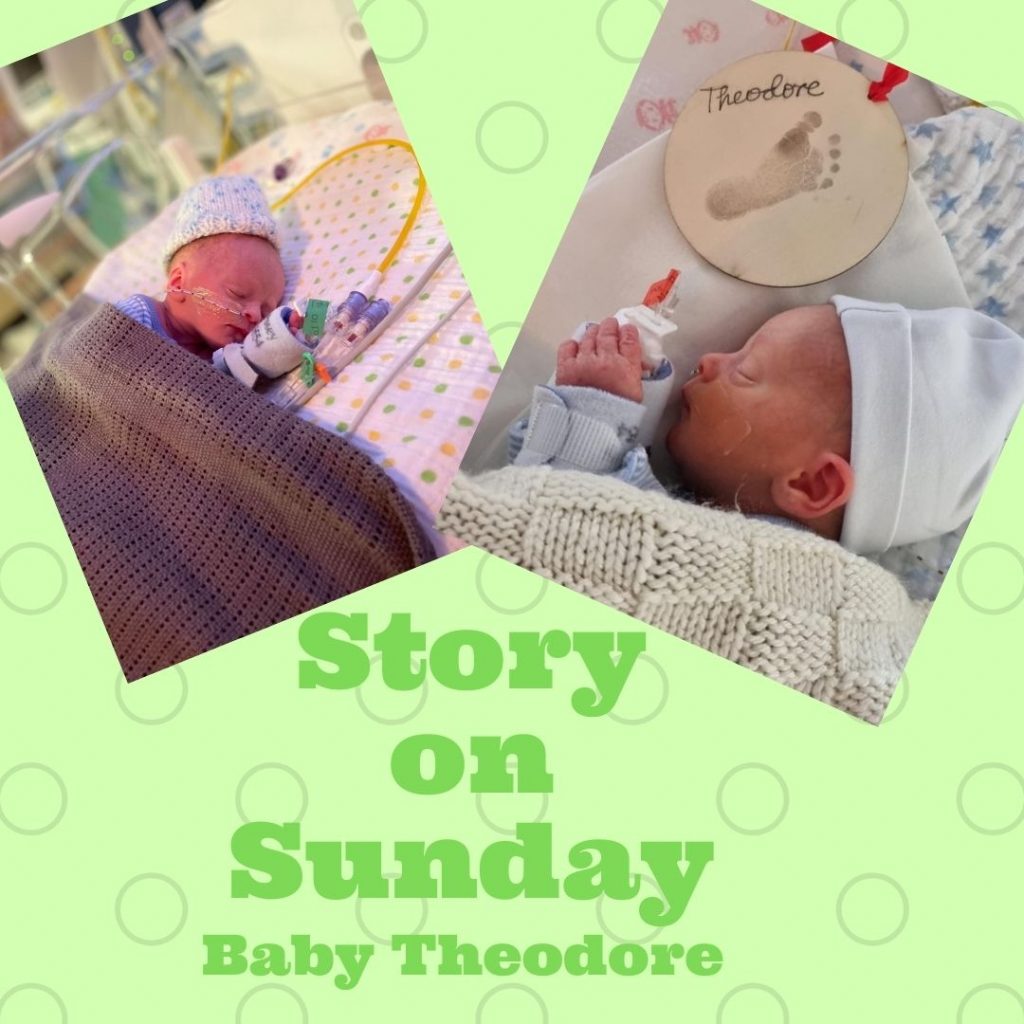 Story on Sunday. ☺️ Today we hear from Charlotte Pocock whose baby Theodore was born in the run up to Christmas. 🎄 Charlotte contacted us to say thank you for all the gifts they received over Christmas and told us it really helped lift their spirits. 🥰

Charlotte shares her baby story with us below:

“On Thursday 16th December I went to my midwife appointment for a routine check-up, I heard our little man’s heartbeat which was strong but my bump was measuring 5 weeks smaller than it should have. The midwife requested a growth scan and I left waiting to hear when it would be. I received a call Friday saying my growth scan would be on Monday so I had a full weekend worrying about everything and panicking if I didn’t feel him move for an hour.

Monday came around and My partner couldn’t get the time off work so my mum came to the growth scan with me (thank God she did!). We had the scan and sure enough our little man was only measuring 30w3d, they also checked my placenta and my amniotic fluid it turns out my fluid was disappearing and my placenta was intermittently failing. I was asked to sit in the waiting room while they looked at the scan. 20 long minutes later I was called to the day assessment unit on my own due to covid, leaving my poor mum on her own worrying in the waiting room. I was asked to do a urine sample and was then hooked up and my blood pressure was monitored and Theodore was monitored. It turns out not only was my placenta intermittently failing, my fluid disappearing and our baby had stopped growing but I also had preeclampsia!

When the doctor came round to see me, they told me I was being moved to the labour ward and I was booked in for a C-section on Tuesday. Full blown panic kicked in and requesting my mum to come join me (no matter how old you get you will always need your mum!) they explained everything again with my mum there and then left me to come to terms with what was going to happen and to be monitored while they waited for a bed to become free on the labour ward. I called my partner to tell him so he could make preparations with work and come a join me in hospital and called my work to let them know I was going to be starting my maternity leave early (I was very lucky they were so understanding and took care of everything for me). My mum went to the gift shop to buy us some tiny baby clothes so our little man had something to wear when he was born as we had nothing that would fit him.

At about 11 o’clock I was transferred to labour ward and Mum had to leave me. Fast forward to 9:30pm, me and my partner were cuddled up in the hospital bed watching the Witcher when they came in to monitor Theodore this was nothing unusual as I was monitored every couple of hours throughout the day. Whilst being monitored I started having tightening in my uterus and each time I had a tightening Theodore’s heartbeat dropped, he was going into distress. They decided at about 10:30pm that it was best to give me an emergency C-section as they were worried, he wouldn’t survive it much longer, a natural birth was also out of the picture as they didn’t think he would survive the stress of a natural birth. This was much sooner than any of us expected so we were told that he might not cry, he would have to be put on a hot cot so we wouldn’t be able to hold him and that there was a chance he would need to be rushed to Brighton to the Trevor man baby unit due to his size, weight and depending on his condition and we would have to follow once the epidural had worn off.

I have no idea how I remained so strong through all this but we took it in our stride and made the best out of a bad situation laughing at our surgery clothes. At 11:30 we were taken into the theatre and I was give an epidural ready for surgery. I was so scared as I had never had an operation before and also scared about the thought of having my baby, him not being ok or being rushed to another hospital half hour away from us but thankful that My partner was amazing was there right next to me holding my hand and stroking my hair. At 12:22am on Tuesday 21st December 2021 Theodore was born, it felt like 5 minutes before he cried but realistically it was less than 30 seconds. They cleaned him up and to our surprise, despite his weight of 3lb 6oz and his small size he was a strong little man and was doing so much better than anyone expected him to do and was able to stay at the Princess Royal Hospital in the Special Care Baby Unit (SCBU). We were both allowed a quick cuddle and he was taken to SCBU.

My partner made sure I was ok but I requested he go with our little man and make sure he was ok. Once they got him settled, cleaned and hooked up to all this monitors Scott came back to me with lots of pictures so I could see him. At about 5am the feeling in my legs had come back and I was eager to get out of bed so I could go and see our little man. He was so tiny and had all these wires coming out of him which was heart-breaking to see but he was here and he was doing well. We were so lucky that he did so well. Throughout his stay all the nurses caring for him were so friendly and kind, sharing their own stories and experiences with having tiny babies themselves, being a shoulder to cry on, answering all and any questions we had and allowing me to come in during the night to feed him as I was still in hospital myself.

Christmas Day came around and myself and Theodore were still in hospital, I woke feeling like the worst mum in the world as we had no gifts for our boy, it was not the first Christmas as a family we had pictured and over night Teddy had struggled with his breathing so the CO2 monitor that was removed the day before was back on. At about 10am my partner arrived at hospital and we went to go see Theodore and wish him a happy Christmas. To our surprise EBA had sorted a stocking for Theodore filled with lovely clothes, socks and toys for him as well as a beautiful Christmas hat. They had also put together gift bags for myself and my partner filled with lots of pamper goodies and our first ever mum and dad mugs! The nurse had also made a beautiful footprint decoration and a beautiful footprint Christmas card! This made our first Christmas as a family (and in hospital) so unbelievable special and one we will never forget!

Theodore continued to improve day on day and 12 days after he was born, we were able to bring our little man home on 1st January 2022 it was the best start to the year ever! Theodore was monitored by outreach (Judy) after leaving hospital who offered support and advice on a weekly basis which was an amazing touch as I don’t think I would have managed the first couple of weeks without her dropping in and reminding us we were doing amazing and that he was doing amazing! Theodore is now 13 weeks old and was 8lb 2oz at his last weight check.

We are so grateful to SCBU, EBA and outreach for giving our little man the best start in life, for all the help and support they offered and for going above and beyond to make a scary and sad time very special in the end.”

Thank you so much for sharing your story with us Charlotte and we are so pleased we were able to help support your family over Christmas time while Theodore was in hospital. We are so pleased to hear he is home and thriving. 💛