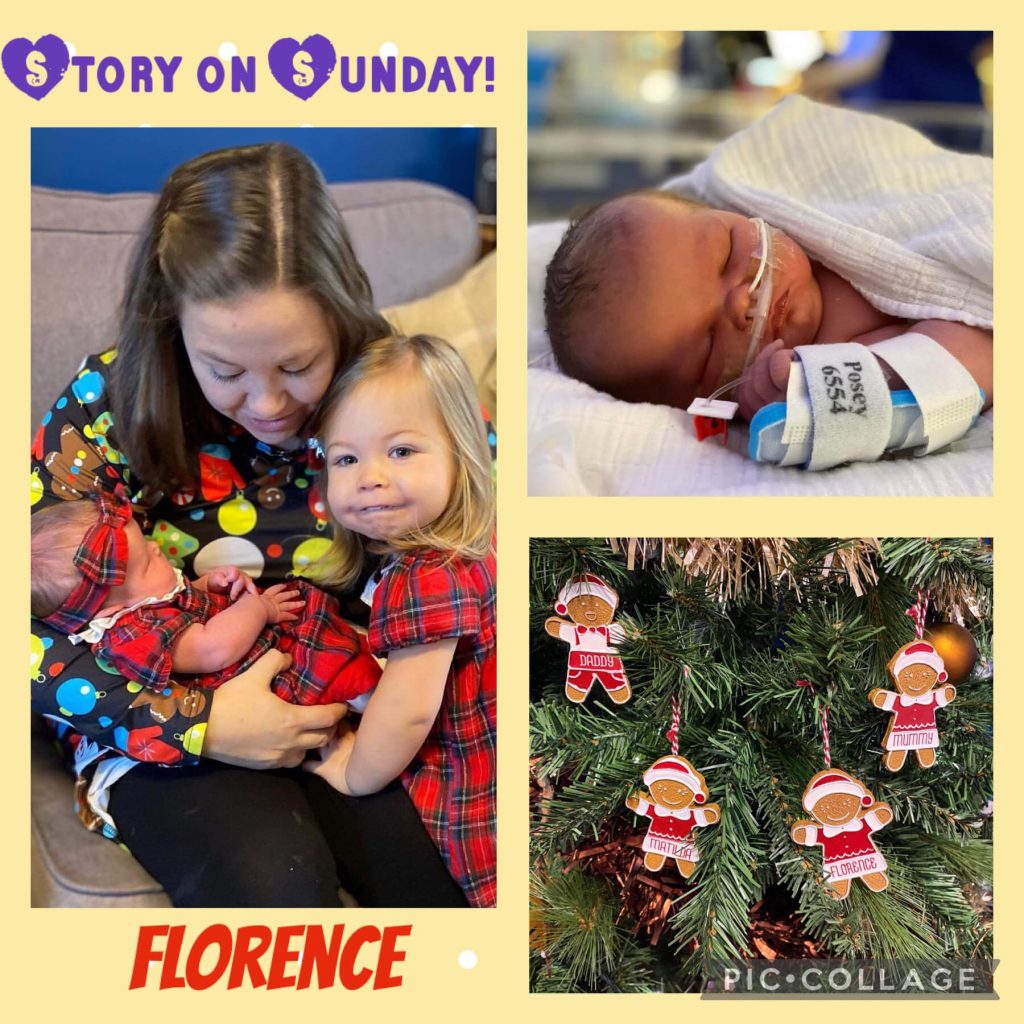 Our story this week is about Florence and is written by her mummy, Alice.

“It was a massive shock to find out that our second baby was due at the same time of year as Matilda, 2 years later! A New Years Eve baby. During a pandemic.
This brought back so many memories and panic, knowing that with my diabetes I was unlikely to make my due date: another Christmas in Hospital.

Florence’s pregnancy was another high risk one. My body knew what it was doing this time, but complications from my previous transfusion led to a highly rare series of blood disorders that caused high risk of Florence developing fetal anemia
It was scary. We were in lockdown. I can’t even go into too many details around that journey as it put me through a rollercoaster of emotions. On one hand, attending each medical appointment solo fearing I would get bad news. To the other, the sense of female solidarity and strength other expectant mothers gave to each other was incredible.
Due to the issues from Matilda’s birth and our health concerns, it was decided I would need a C Section this time around.
Her birth also threw in some curveballs and once again I found my self unwell, apart from my newborn who was in NICU.

Florence was born at 37 weeks on the 9th December weighing a whopping 9lbs 8. (Did you even know they could used forceps during a section?😂)

This time was tricky. I had to heal, I had a toddler at home, I was alone in a place I hated during a lockdown, and my baby was apart from me with her own health needs. Her birth story and early recovery are still fresh, especially as I sit here typing our story on the eve of her first birthday.
It took time, and although there was nothing seriously wrong with Florence she was not well enough to be discharged. I however was. Leaving your baby behind in hospital each day is something only another NICU parent can understand. Like taking part of your heart and just leaving it open and unprotected and walking away. A week in, and although we had fallen into a rhythm we were all struggling. We needed to get home, as a family.

The little things were the hardest. Such as putting on a fake smile and trying to enjoy putting up our Christmas tree with a happy Matilda completely oblivious, and opening ornaments gifted to Florence who was not with us.

It was a relief to be transferred back to our nearer hospital after the first 10 days, it felt like home. The NICU was more homely, less clinical and was covered in Christmas decorations. It was another step to the homeward straight.

The morning of the 22nd whilst I was frantically packing expressed milk into my day bag I got a call from the hospital which put me into instant panic. They advised me to bring an empty bag, “just incase ”. Florence had remained stable for 8 hours, and they were optimistic. It was touch and go through the day to see if her sats would stay steady, and they did!
We made it home the eve before her sisters 2nd birthday, just in time for Christmas. It was a miracle. I do think Matilda was a bit gutted with her present that year though! After a long couple of weeks we were able to be in the same room as our baby, at the same time (due to lockdown rules we had never done this before!). To then add Matilda into the mix, it was perfect! Our family was finally together. That Christmas was so magical, just the four of us! 🥰

Whilst many families mark their Christmas in traditions we mark ours with celebrating the achievements our girls overcame in their start in the world! It’s not about presents, it’s about being able to be together as a family.” 💛