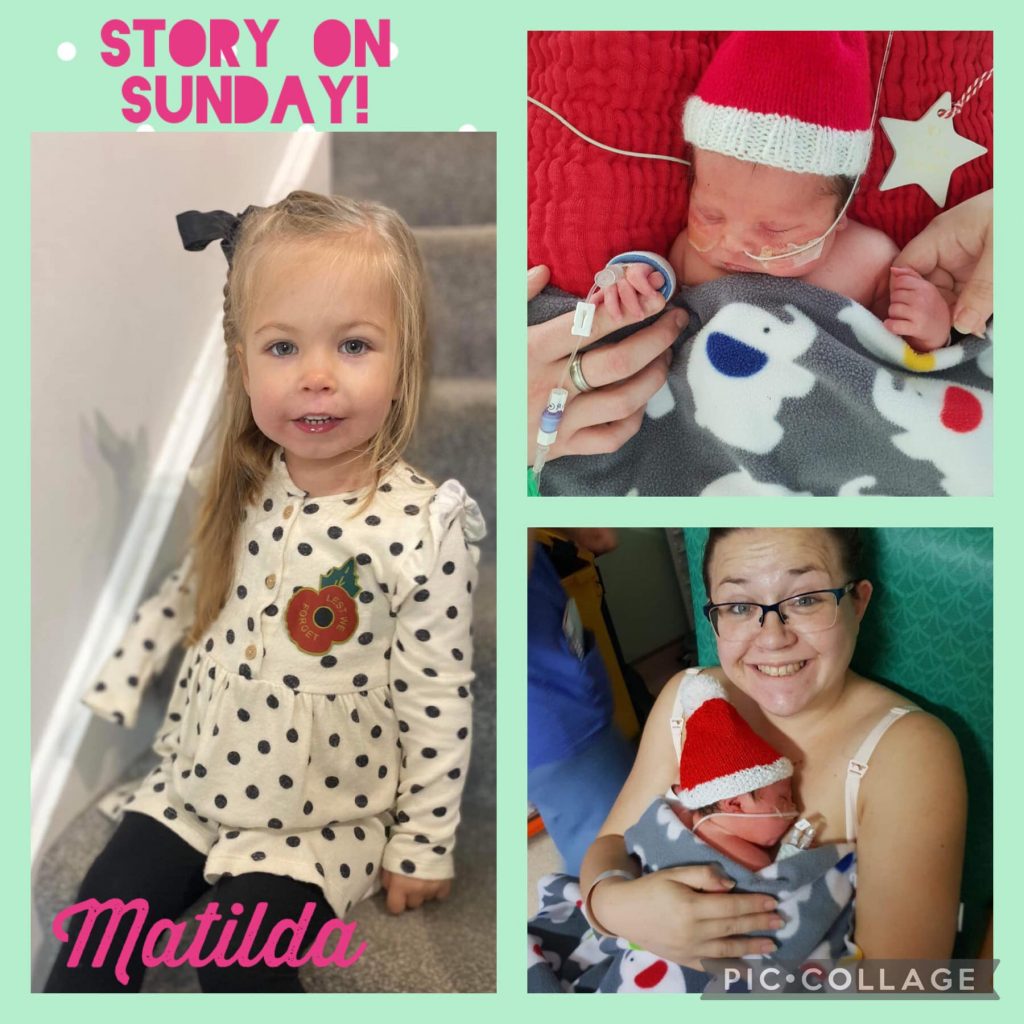 This week’s story is about Matilda, written by her mummy, Alice.

“Christmas is a weird time in our household.
After years of trying, miscarriages and IVF we decided that we needed to take a break.
It had been a really tough Christmas in the midst of my hormone treatments and it took a huge toll on my health. That round once again ended in heartache and we decided we would take a few months off before starting the next (and final) round. However something happened in my body and we fell naturally fell pregnant with our first: Matilda.
Matilda’s pregnancy had been rocky, and my body (and Type 1 Diabetes) didn’t cope too well.

Matilda was born at 35 weeks on 23rd December 2018 weighing a solid 7lbs 10.
Her weight gain and need for early induction were all side effects from me being Type 1 Diabetic.
One Thursday (35 weeks pregnant) at a diabetes appointment the doctors picked up early signs of problems with my placenta. They admitted me then and there to Hospital for an emergency induction.
As we were still 35 weeks, we were transferred down from our local to a city hospital for an induction that evening.

Labour began okay, but then suddenly things took a turn. I was dehydrated. They had hooked me up to two glucose bags, instead of an IV fluid drip.
Matilda’s heart rate also kept dropping, and alarms started ringing. She had gotten her shoulders stuck and kept pulling on her own cord! The room suddenly filled with doctors and I was taken to theatre.

Missing out all the gory details, just as they were prepping for an emergency C Section, Matilda was born through forceps, and after one gravelly scream she stopped breathing!! She was taken straight to the resuscitation table, and after a few minutes of frantic work, she began crying but had really laboured breathing: she was rushed off to special care!

I suffered a large loss of blood and a placental rupture, and had to have a manual placenta removal. Subsequently I was whacked out on some seriously strong drugs for the next 6 hours.
I was wheeled up to special care and was able to meet Matilda later that night and hold her very briefly.

Matilda was in an incubator, on 3 different drips, a feeding tube, had suffered 3 hypos, was on oxygen, an ECG monitor and had fluid on her lungs and in her stomach. A little later on she then required a UV lamp for jaundice!

Christmas Eve was a miracle.
Over the day we had our first proper cuddle (skin to skin!), Kev got to hold her for the first time, we both got to change a nappy and we saw her with her eyes open for the first time 😍

That then led into Christmas Day. She came off her oxygen, off the lamp, and had a reduction in one drip. We were also flooded with presents that charities donated to families with children on the ward, it really helped to give us a reminder that this was still our first Christmas as a family.

We went downstairs and opened some presents and were then greeted by a midwife for my normal observations, she casually informed us that Matilda’s transport had been arranged to PRH! This was horrible shock as we hadn’t been informed by anyone that there was a plan to move Matilda let alone that she was well enough to move! Kev went straightaway upstairs to the SCBU and after some discussion was able to deduce that the plan was to move both Matilda and I to PRH, this though scary was actually a good thing as it showed Matilda was getting stronger and I could get the improved care I needed from the diabetic team at PRH.

We were transported by the most caring duo who made the whole process calm and actually quite fun for the two of us.

Within half an hour of arrival at PRH I was able to go through to see a totally unrecognisable little baby girl!
No monitors, in a normal cot, and only one IV fluid & stomach tube on board… it was weird! And scary! How could something in such high risk 24 hours previously be given so much freedom!

Due to my own issues and health establishing feeding was a struggle. I had lost a lot of blood. My diabetes was trying to settle into a whole new routine. I had an iron deficiency. Alongside general post birth issues after what is deemed a “traumatic labour”.
However on Boxing Day morning Matilda and I were able to start our little learning curve! It was going so well until the afternoon where I was informed my body wasn’t recovering and I would need to have a blood transfusion. This was going to take me away from my little fighter for 5-6 hours. Luckily the nurses on duty allowed Kev to bring her to come and say hi quickly.

Things continued slowly over the next few days, it took us both time to heal and be fit enough to be discharged.
On New Years Eve we were discharged (with the promise of returning for day assessments the following few days).

That year Christmas felt taken from us, but it also gave us the most precious gift ❤️ And to this day I will never forget the generosity of charities and all the hospital staff that tried to create a Christmas for us all.”❤️