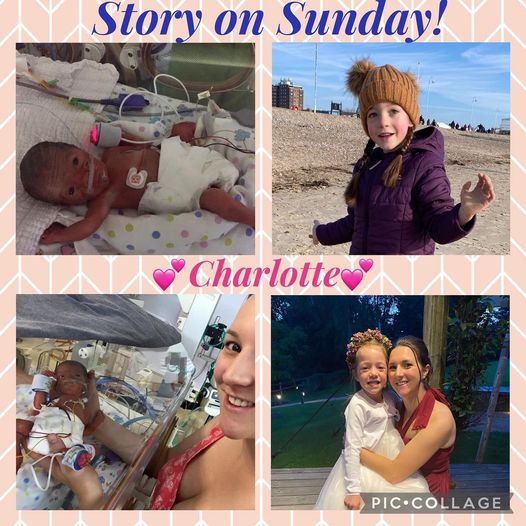 Story on Sunday!
This week’s story is written by Jen, about her daughter Charlotte. 😊
Jen says “I had been suffering with what I thought was constipation for a few days, when on 4th August 2015 (27+2 gestation), I suspected there was something more going on, so went to Princess Royal in Haywards Heath to be checked out. They delivered the news I was 4cm dilated and this baby was on the way. I was blue lighted to The Royal Sussex in Brighton and over the following 48 hours was given all the medicine they could to prolong the pregnancy and make my baby as ready for the outside world as possible. At 08.49 on 6th August 2015 our baby Charlotte was born at 27+4 gestation weighing 1080g (2lbs 6oz). Charlotte let out a little cry and was taken to TMBU, where she spent nearly 4 weeks. We thankfully were able to stay in one of the amazing rooms in the Ronald McDonald House on Abby Road, which was indescribably comforting when otherwise we would have been an hour away.
Being a midwife, I was not the easiest of parents to manage as I wanted to know every intricate detail of Charlotte’s existence and all the numbers/trends/events on her monitoring. But I can whole heartedly say that all the doctors and nurses were absolutely fantastic and I knew my little one was in the best hands. Charlotte’s journey was a bit up and down but generally we were incredibly lucky and she did really well, and at exactly 10 weeks old she came home to us.
During her 4 weeks in TMBU and 6 weeks at PRH the support from the EBA was amazing. The little treats in the kitchen were incredibly comforting, and had it not been for those chocolate bars and delicious home made cakes, I would not have eaten anything from breakfast to dinner most days. It was always really nice to see the support from the EBA volunteers who attended the neonatal units, just knowing they would be there if I needed a listening ear was just what I needed.
Thank you to everyone at the EBA and all their supporters! The work you do is really incredible and makes a bigger difference than I could tell you!” 💛