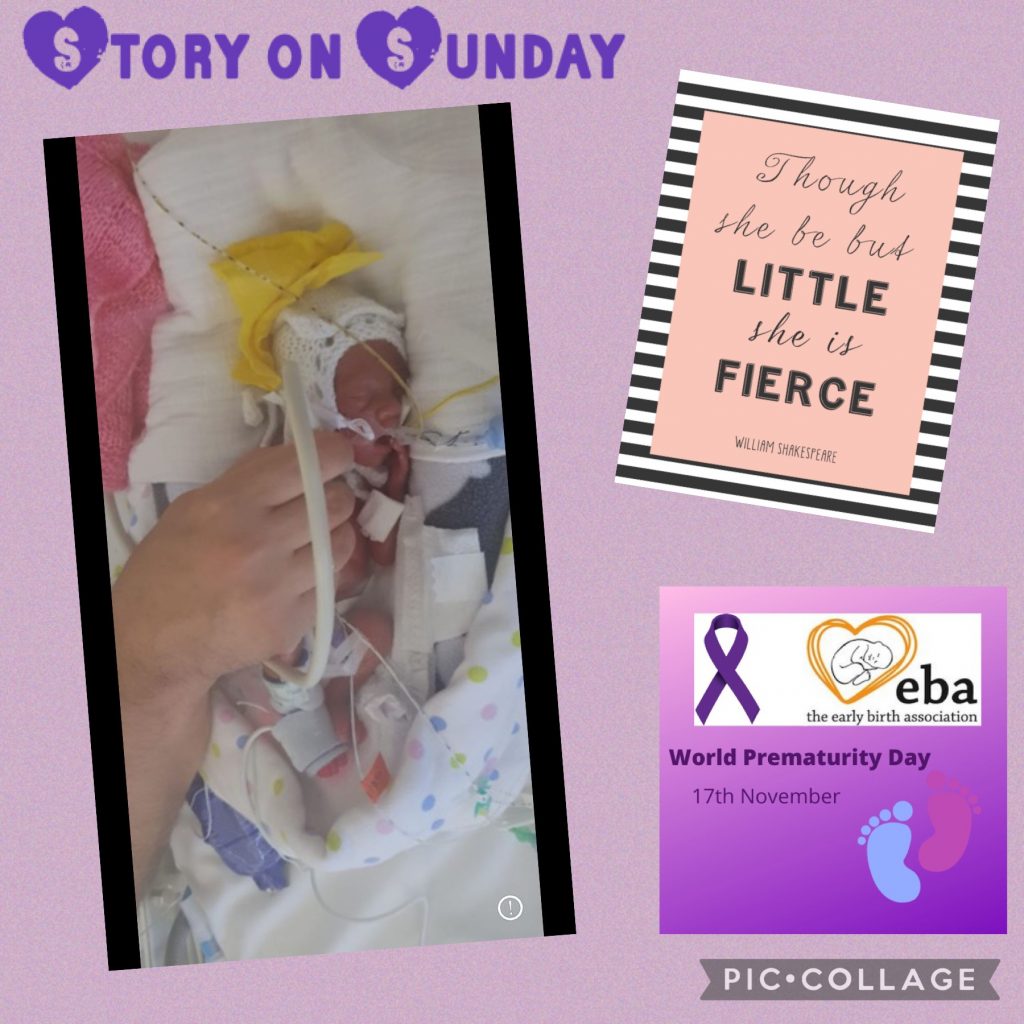 In the run up to World Prematurity Day, this week’s Story on Sunday is about Sienna, who was born at 24 weeks. Sienna is the daughter of our new Committee Member Marie, who will be introduced to you more next week!

Marie says: “Sienna was born in May 2019 at 24 weeks plus 2 days weighing just 1lb 7ozs. Up until then my pregnancy was fine and I had no complications, however I became unwell and had bad back pain. I went to the hospital to be checked and was told my waters had broke. By this point I was then being rushed to Hastings Conquest as I developed an infection They started me on magnesium and gave me steroids when they scanned me they thought my tear in the waters could be sealed and I could carry on with my pregnancy but my infection markers became higher and soon I was then being rushed to Brighton. We were then told the safest thing for me and sienna was for her to be delivered. myself and Nick were told she would have 50/50 chance of surviving, we were terrified our world turned upside down.

Sienna was then born by emergency c section, I remember hearing her cry which I never expected to hear, it gave us hope. Sienna was then taken up to TMBU and was ventilated. The first few weeks were very worrying and involved Sienna having a trip to Southampton to have heart surgery to close the duct above her heart. The surgery went well and We were then transferred back to Tmbu where we spent the next 3 and half months. Sienna then started to make slow but great progress and just needed to grow.

The care and support from the nurses and doctors on the unit were incredible, they saved our little girl and we cannot thank them enough we are truly forever grateful. Not only did they support us as a family but went above and beyond to support Sienna’s big sister Jolie who coped so well with the situation. We were so lucky to be able to stay at the Ronald McDonald house I honestly don’t know what we would have done without it. Just like most premature babies Sienna was diagnosed with chronic lung disease and needed to come home on oxygen. We came home around what would be Sienna’s due date at the end of August, she stayed on home oxygen for around 3 months, And was slowly weened off it. Since then Sienna has and still is developing amazingly we are so proud and feel so lucky to have her here she is now a cheeky thriving 2 year old.”

Thank you for sharing Sienna’s story with us Marie, and we are so pleased you have joined the EBA Committee. 💛