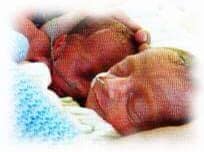 This is Rachael Ticehurst’s NICU / SCBU story.
Life was ticking over nicely. I had got my year 2 class through their sats and was starting maternity leave at the weekend, safe in the knowledge that there was a steady supply of banana milkshake (the craving of the moment!)
We had bought nothing.
My father had bought us a cot which was great but we were expecting twins and possibly needed some other bits and bobs.
The Friday before I started my leave we trudged up to RSCH for a scan. A routine scan. When you have twins you have a couple more scans and I think possibly extras depending on sac sharing etc.
It was one of those desperate for a wee scans (pretty much an every 5 minute situation when one is sitting on your bladder)
It was a 29 week scan. It was bang on 29 weeks too. The sonographer was quiet. Concentrating we thought. Then she left the room and came back with someone else (super sonographer?) They looked and asked us to go upstairs to a clinic. Naively we thought nothing of it.
We did when we got there. We soon learned that reversed dopplers were not good and that twin 2 was in real trouble. I was given a bed and that injection to inflate their lungs. Anyone who has had that will agree it hurts.
And so it was that Tom and Jack entered the world at 29 weeks weighing 890g and 1.2kg (fatty!)
Tom took a while to aclimitise but had little wrong other than an aversion to breathing. Jack however had a rougher road to travel. He was the smaller. He had no working stomach or bowel. He couldn’t breathe on his own and he had infection after infection.
There are parts of the journey that never leave you, that call to say come in to the hospital because things aren’t looking good, the day you don’t recognise your tiny baby because he’s puffed up with illness and now has TPN via a vein in his head as all others have collapsed, the bump as he is thrown back onto your lap by the nurse who has arrived to bag and mask him because breathing has got too much again and all you can do is sit helpless, watch and cry silent tears. BUT – and it’s a big but – there are bigger memories made in NICU too. Kindness, understanding, devotion.
The first breaths on cpap not a ventilator, the first time off cpap, the cuddles, those tiny nappies you change in the incubator. All of these moments are triumphs and all are stepping stones.
And so they grew and got stronger. It was a long 2 months. Jack didn’t leave room 1, he was discharged from there – and to this day he still doesn’t like change – little monkey! Tom made it to nursery 3.
I have some amazing memories, Tom being put into Jack’s incubator and Jack’s oxygen sats going straight up, Tom pulling out Jack’s feeding tube, Jack breast feeding off his tigger toy – being nil by mouth for over a month was hard. I can’t do 30 mins – I’m in awe of his strength.
My little men, one of whom should not be able to walk or talk can do both and this year, aged 17 they’ve started college and I couldn’t be prouder of them. From intensive care to independence. They walked their own path from day 1 and they will continue to do so thanks to the care and dedication of Trevor Mann Baby Unit staff. 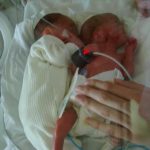 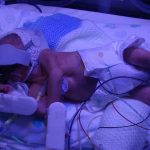 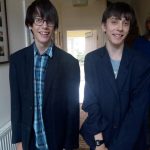